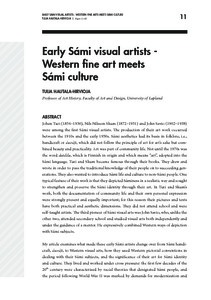 Johan Turi (1854–1936), Nils Nilsson Skum (1872–1951) and John Savio (1902–1938) were among the first Sámi visual artists. The production of their art work occurred between the 1910s and the early 1950s. Sámi aesthetics had its basis in folklore, i.e., handicraft or duodji, which did not follow the principle of art for art’s sake but combined beauty and practicality. Art was part of community life. Not until the 1970s was the word daidda, which is Finnish in origin and which means “art”, adopted into the Sámi language. Turi and Skum became famous through their books. They drew and wrote in order to pass the traditional knowledge of their people on to succeeding generations. They also wanted to introduce Sámi life and culture to non-Sámi people. One typical feature of their work is that they depicted Sáminess in a realistic way and sought to strengthen and preserve the Sámi identity through their art. In Turi and Skum’s work, both the documentation of community life and their own personal expression were strongly present and equally important; for this reason their pictures and texts have both practical and aesthetic dimensions. They did not attend school and were self-taught artists. The third pioneer of Sámi visual arts was John Savio, who, unlike the other two, attended secondary school and studied visual arts both independently and under the guidance of a mentor. He expressively combined Western ways of depiction with Sámi subjects.

My article examines what made these early Sámi artists change over from Sámi handicraft, duodji, to Western visual arts, how they used Western pictorial conventions in dealing with their Sámi subjects, and the significance of their art for Sámi identity and culture. They lived and worked under cross pressure: the first few decades of the 20th century were characterized by racial theories that denigrated Sámi people, and the period following World War II was marked by demands for modernization and assimilation. Therefore, I also discuss how the conflicts of the time influenced the art of these three early Sámi artists.