How Neighbours Communicate: The Role of Language in Border Relations 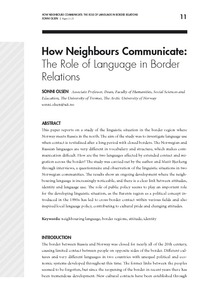 This paper reports on a study of the linguistic situation in the border region where Norway meets Russia in the north. The aim of the study was to investigate language use when contact is revitalised after a long period with closed borders. The Norwegian and Russian languages are very different in vocabulary and structure, which makes communication difficult. How are the two languages affected by extended contact and migration across the border? The study was carried out by the author and Marit Bjerkeng through interviews, a questionnaire and observation of the linguistic situations in two Norwegian communities. The results show an ongoing development where the neighbouring language is increasingly noticeable, and there is a clear link between attitudes, identity and language use. The role of public policy seems to play an important role for the developing linguistic situation, as the Barents region as a political concept introduced in the 1990s has led to cross-border contact within various fields and also inspired local language policy, contributing to cultural pride and changing attitudes.