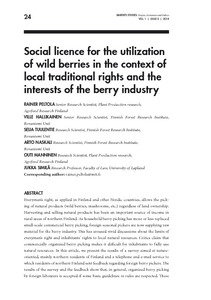 Everyman’s right, as applied in Finland and other Nordic countries, allows the picking of natural products (wild berries, mushrooms, etc.) regardless of land ownership. Harvesting and selling natural products has been an important source of income in rural areas of northern Finland. As household berry picking has more or less replaced small-scale commercial berry picking, foreign seasonal pickers are now supplying raw material for the berry industry. This has aroused vivid discussions about the limits of everyman’s right and inhabitants’ rights to local natural resources. Critics claim that commercially organized berry picking makes it difficult for inhabitants to fully use natural resources. In this article, we present the results of a survey aimed at natureoriented, mainly northern residents of Finland and a telephone and e-mail service to which residents of northern Finland sent feedback regarding foreign berry pickers. The results of the survey and the feedback show that, in general, organized berry picking by foreign labourers is accepted if some basic guidelines or rules are respected. These guidelines may stem from local customary laws or traditions which have regulated berry picking. Another factor which would improve local acceptance and promote social licence for organized berry picking by foreign and non–local labourers is the distribution of benefits. At present, the advantages of organized berry picking are seen as benefiting stakeholders outside the local community, whereas local communities have to bear the costs: for example, increased berry picking activity in areas which they have utilized for a prolonged time, sometimes through generations.