"Male menopause" : the birth of a new illness? 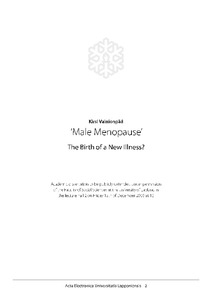 The existence of male menopause is uncertain (e.g. Snyder 2004; Rhoden & Morgenthaler 2004) and also the effects of HT have not yet been clarified as being reliably safe. Nevertheless, new constructions of the male menopause, currently being created on several platforms, consider it as a disease or at least a condition that requires medical treatment. This study focuses on some of those Finnish platforms where the meanings of male menopause are constantly being constructed: popular magazines, medical textbooks, texts for medical professionals, and web-pages. The final article presents quantitative material on the distribution of male hormonal drug use in Finland. The theoretical discussion on medicalisation forms the conceptual core of this study. The theoretical discussion has shifted in recent decades from that of traditional medicalisation to biomedicalisation, with the Foucauldian concept of biopower increasingly important in the research. The research consists of an introductory section and four published articles that together answer the question of the medicalisation of male menopause. 1. The construction of male menopause in Finnish popular magazines This part is based on articles on male menopause published between 1982 and 2002 in Finnish popular magazines. Male menopause is initially presented as a social problem, but during the study period, writers increasingly present it as an illness. 2. The making of an ageing disease: the representation of the male menopause in Finnish medical literature The data come from information provided for Finnish physicians about male menopause during 1982–2002. It is found that disagreements about the male menopause have been marked. Some authors describe it as a consequence of the decline in gonad functioning that comes with increased age, and some have argued that we are making a disease out of normal ageing. Its association with sexual problems has clearly risen in prominence: libido and potency disorders have recently been identified as symptoms. 3. Commercial web-based information on male menopause and male hormone therapy The material is drawn from private clinic websites, Finnish health websites, and also from the websites of the male hormone manufacturers. This part provided a perspective on how lay people become health consumers. Different discoursive formations are found in the material: healthism, a take-care-of-yourself discourse, a quasi-professional discourse, an uncertainty discourse, a risk discourse and a good sex discourse. 4. The first steps of testosterone therapy dissemination in Finland This part uses quantitative data on drug distribution that originate from drug sales statistics. The growth of male HT use was most vigorous in the capital area, as would be expected when considering theories on the diffusion of medical innovations. This study as a whole shows that the interest in male menopause has risen and that it is more and more treated. However, the number of users remains so small that very firm conclusions cannot yet be drawn. Consumers and physicians in the future are prepared to request and provide treatment on ‘male menopause’, if it is found to be a real illness. Key words: Medicalisation, male menopause, male hormone therapy, consumerism, biopower