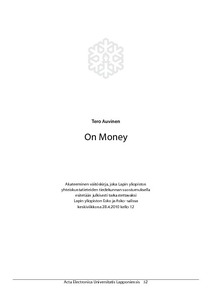 The study explores the political choices and confl icts inherent in the “technical” specifi cations of any monetary system and some of the social scientifi c implications of the prevailing forms of money in the widest possible sense of the terms. As a constantly evolving social relation, no single theory of money is likely to capture its tremendous capacity for self-transformation. It is argued that the precise manner in which the prevailing forms of fi nancial capital in general and money in particular are socially constructed creates a privileged reality for financial capital which distorts competition among the diff erent factors of production and eliminates money’s capacity to accurately capture and reproduce real world economic phenomena – if possible even in theory. Contrary to some of the traditional economistic legitimating narratives for money, it is suggested that control over the issuance and circulation of money may render various aspects of the human governable with a fraction of the resources that might be required to implement comparable combinations of coercion and rewards through alternative institutional mechanisms. While it is far from clear that money can ever be specifi ed in a manner that would solve its inherent political and social confl icts to an extent that would permit “economic” analysis to begin, some of the social and political implications of diff erent types of monetary institutions are often not beyond the reach of public policy decisions. A combination of a seigniorage-based unconditional basic income and a demurrage tax on money is introduced as an example of a specifi c public policy program that could rectify or mitigate some of the polarizing consequences of the prevailing forms of money as well as illuminate the spectrum of political choice inherent in the design of any monetary system. The study explains the continuing signifi cance of a wide spectrum of explanatory frameworks for the nature of money as a function of their strategic political utility rather than empirical accuracy and identifi es four main issue areas as particularly fruitful for further research.