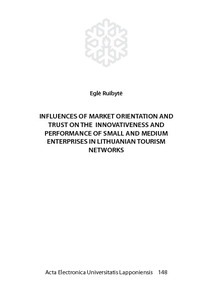 The focus of this thesis is on market orientation and trust impacts on innovativeness and performance of managers in tourism. While being a part of the Experience Stratos 2007–2017 research program we have studied this topic and published tentative models with combined datas from several countries before. In these preliminary studies we found positive relations between the main latent variables. This tentative model is my null hypothesis.

As a Lithuanian, and in considering the fundamental shift from post-socialist market economies after fifty years of communist rule, I find it necessary to (dis-)confirm the tentative model. Why? Soviet economies were not based on trust, and there is a reason to believe that context still influences our values, attitudes, and, therefore, our choice behaviors, too. Therefore there may be reason to believe that the null hypothesis cannot be confirmed. This justification for the choice of the thesis theme leads me to the research question, which is how market orientation and trust influence innovativeness, and how these affect the performance of enterprises in tourism networks, specifically in Lithuania. The theoretical discussion focus is, therefore, on market orientation, trust, innovativeness and performance in tourism networks.

The methodological ambitions of this research influenced the choice of mixed methods design. This includes, first, the content analysis of institutional factors that have an impact on the business enterprising environment in Lithuania. Clearly, Lithuania has a well established institutional structure in the tourism industry as well as a developed legal framework. However, the public sector still lacks understanding of the tourist industry as an important sector in the economy. Consequently, the state fails to provide sufficient support for tourism-related businesses and creates obstacles for the development of the country as a tourism destination.

Second, the quantitative approaches used univariate and multivariate analyses including modelling of survey based data. In order to collect data, Experience Stratos trust project questionnaire was used (here only the relevant questions of it) which was also used in Finland, Sweden and other partner countries. Eight health and seaside resort destinations were chosen for analysis in Lithuania which has the existing networks and potential in destination development.

The scientific contribution of this research was that it was the first study to establish the relations between Market Orientation and Trust on Innovativeness and Performance. The original hypotheses were disconfirmed to the extent that the Trust to Innovativeness relationship proved to be negative. Further studies are needed to shed light on does this reflect the sample & population only, or the post-socialist society.