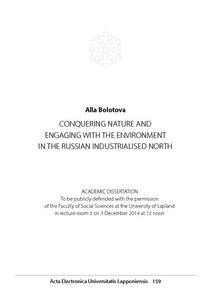 This dissertation explores perceptions of the environment and practices of interaction with natural environments at the Northern periphery of the Soviet Union/Russia as well as concepts of nature characteristic for the official Soviet discourse. In order to extract the rich natural resources of the North, numerous new industrial towns were founded from the ground up in areas with no previous permanent human settlements and were populated by migrants from all over the Soviet Union. The Soviet authorities motivated people to go to the North by material benefits but also by an intense ideological campaign with a rhetoric of ‘conquering nature’ and ‘mastering the North’. In this thesis, I argue that for an understanding of human-environment relations in the Russian industrialised Arctic, we need to combine two different analytical angles: the Soviet dominant discourse on nature and its transformation over time on one hand, and the lived experience of the implementers of Soviet industrialisation and their engagement with the natural world on the other hand. Therefore, I examine how people who were on the State’s mission to ‘master the North and nature’ came to feel a strong emotional attachment to and love for the Northern environments. Based on empirical materials from three industrial towns in the Murmansk region, I analyse how new Northerners combined both their involvement in the extractive approach to natural resources and their lived experience of dwelling in Northern environments. In the existing scope of social science scholarship on non-indigenous residents of the Russian North, studies of people’s engagement with the natural environment are usually separated from studies of the State’s strategies and discourses of nature. This study focuses on the so far understudied relations of the urban population of the Russian Arctic to their environment.This thesis bridges these gaps by innovatively combining the concept of ‘discourses of nature’(Macnaghten 1999) with the building and dwelling perspectives suggested by Tim Ingold (Ingold 2000), in analysing the dominant discourse on nature in the USSR and engagements with the natural environment of people working for extractive industries.