Work-placement as a lived-through educationally meaningful experience of the student : an application of the phenomenological descriptive approach 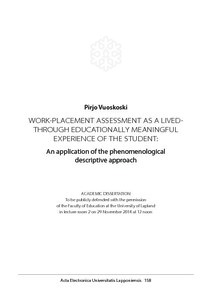 In this study, a phenomenological descriptive method was applied to the clarification of the lived-through educationally meaningful experience in student assessment, related to a work-placement and higher educational context. As an account for an essential structural description in generating scientific knowledge, the study increases understanding of the phenomenon of interest by giving insight into the direct assessment experience and its key constituents, using verbal expressions and acts of consciousness as the medium for accessing the situation of the other, and describing it exactly as experienced as a presence for the experiencer, from an educational perspective.

At the beginning of the study, the researcher assumed the attitude of phenomenological scientific reduction and an educational perspective, while being mindfully sensitive to the type of phenomenon being researched. By turning to others, the study began by obtaining concrete descriptions of experiences from those who had lived through situations in which the phenomenon of interest had taken place. The participants of the study were sixteen undergraduate physiotherapy students from two higher education institutions in Finland. At both schools, periods of work-placement alternated with academic study blocks throughout the problem-based course curriculum, and supervised workplacements all together formed almost one fourth of the whole study program. The raw data of the study consisted of audible expressions of the participants’ retrospective descriptions about aspects of living through the work-placement assessment process, as they had experienced it.

After transcribing the audible expressions, verbatim, into individually constituted descriptions of the students’ lived-through experiences, the researcher, by maintaining the assumed attitude, then analyzed the material according to the descriptive phenomenological method developed by Amedeo Giorgi on the basis of the phenomenological philosophy and method of Edmund Husserl. The findings and implications of the study hence account for the results of a second-order description by the researcher, based on the adoption of the phenomenological scientific attitude and reduction, the method of free imaginative variation, and the use of intentional (signifying-fulfilling-identifying) acts of consciousness. The applied phenomenological analysis consisted of five steps: (1) going through the concrete descriptions in order to get a sense of the whole, (2) constituting meaning units within the descriptions, (3) transforming the constituted meaning units into phenomenologically and educationally sensitive expressions, (4) synthesizing the transformed meaning units into one unifying structure, and (5) determining variations and dynamics among the key constituents that comprised the structure.

The phenomenological analysis of the data showed that a distinguishable chain of events could be discerned, that the participants of the study identified positively and/or negatively meaningful experiences in assessment, carrying a great deal of personal and educational significance for the student. What constitutes the most essential aspect of the living through of the educationally meaningful experience in work-placement assessment, in this study, is the intention of the student to obtain self-knowledge through assessment encounters, and the sense of fulfillment of that subjective self-interest. Once the awareness of the self-interest is awakened in the student, the other necessary constituents become possible. These were discovered to be: resemblance of assumptions and practice, sense of shared interest/s, reliance on self and others, sense of safety and openness, sense of emotional engagement, sense of enhancement and support, and challenge to assumptions and self-interest. The thesis concludes by presenting the implications drawn from the findings of the phenomenological empirical investigation.