The right to mine? Discourse analysis of social impact assessments of mining projects in Finnish Lapland in the 2000s 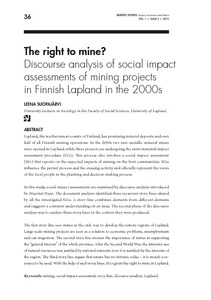 Lapland, the northernmost county of Finland, has promising mineral deposits and over half of all Finnish mining operations. In the 2000s two new metallic mineral mines were opened in Lapland, while three projects are undergoing the environmental impact assessment procedure (EIA). This process also involves a social impact assessment (SIA) that reports on the expected impacts of mining on the host communities. SIAs influence the permit process and the ensuing activity and officially represent the views of the local people in the planning and decision-making process.
In this study, social impact assessments are examined by discourse analysis introduced by Maarten Hajer. The document analysis identified three recurrent story lines shared by all the investigated SIAs. A story line combines elements from different domains and suggests a common understanding on an issue. The second phase of the discourse analysis was to analyse these story lines in the context they were produced.
The first story line sees mines as the only way to develop the remote regions of Lapland. Large-scale mining projects are seen as a solution to economic problems, unemployment and out-migration. The second story line stresses the importance of mines in supporting the “general interest” of the whole province. After the Second World War, the intensive use of natural resources was justified by national interests; now it is justified by the interests of the region. The third story line argues that nature has no intrinsic value – it is merely a resource to be used. With the help of such story lines, SIAs grant the right to mine in Lapland.