Ethics of hospitality : participatory tourism encounters in the northern highlands of Nicaragua 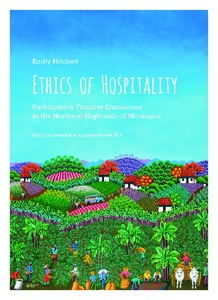 In recent decades, the idea of community participation has played an important role in the search for sustainability, solidarity and inclusion in tourism development. The concept of participatory development has evolved in the course of rich and contradictory discussions on good life, democracy and colonialism towards a vision of alternative and small-scale tourism development, especially in the case of economically marginalized communities. This is the situation in Nicaragua, where the rapid growth of international tourism has encouraged government officials, development practitioners and researchers alike to explore and enhance the opportunities for rural tourism development through social projects. To be sure, the initiatives and guidance for community participation commonly come from the outside, from guests. While criticism of and scepticism about the real possibilities of participatory approaches in tourism have grown steadily, the academic literature has paid only cursory attention to the ideologies, values and ontologies underlying the idea of participation as such. The research journey described in the thesis is a search for ethics in tourism settings. The study analyses participatory tourism encounters between rural communities and tourism experts, drawing on postcolonial critique and hermeneutic phenomenology. Encounters are defined here as spaces and liminal spheres between people in which the conditions of participation become negotiated. The scientific purpose of the study is to deconstruct and envision alternatives to participatory encounters through the notion of hospitality. To this end, the research follows Jacques Derrida’s and Gayatri Spivak’s call to question whether our ways of knowing and being in the world, such as the Western episteme and Western metaphysics, are universal and natural. The theoretical approach builds on Emmanuel Levinas’ thought on ethics of hospitality, which invites one to envision ethical subjectivity as responsibility and receptivity towards ‘the Other’. Situating the idea of participation at the intersection of intersubjectivity, hospitality and ethics, the study asks: How do self and other, or hosts and guests, welcome each other in participatory tourism encounters? The empirical dimension of the research includes a longitudinal ethnographic study on rural tourism development in Nicaragua, based on three field visits between 2007 and 2013. The research material was produced through semistructured interviews and participatory observation in four coffee-cultivating communities in the country’s northern highlands, and at the offices of the international aid organizations, NGOs and the Nicaraguan tourism ministry. In order to focus on the relations between rural communities and tourism experts, the analysis of the data was guided by the methodological discussions in hermeneutic phenomenology. This process combined both a holistic and selective reading of the data to explore how the informants described, experienced, and gave meanings to the encounters that took place in rural tourism settings. The experiences from Nicaragua indicate that tourism experts tend to celebrate what they see as the ease of tourism development, along with the unconditional hospitality conventionally ascribed to rural areas, as a recipe for success. While the possibilities, conditions and risks of welcoming tourists become continuously shaped in various encounters between hosts and guests, guests regularly overlook or romanticize the historical, social and material experiences of the people living in host communities. The analysis indicates that despite – or actually because of – emancipatory intentions to help the local hosts, tourism experts end up dominating the spheres of dialogue. The study argues that instead of discussing the relational mode of participating - being, doing and knowing together - both practical and scholarly debates have paradoxically celebrated the individual free subject as the protagonist of inclusion and social justice. In this light, the study proposes that moving towards more inclusive and hospitable spaces of participation requires a readiness to interrupt self as an individually responsible subject. The research contributes to the streams of tourism studies which call attention to other-orientedness in social relations. The results can be applied as a source of encouragement to decolonize research methodologies, promote participatory projects and develop pedagogical approaches that keep the door open to the unpredictable and the unexpected. Perhaps the most salient contribution of the study is that it provides a conceptual tool to facilitate reflection on alternative ways of doing togetherness.