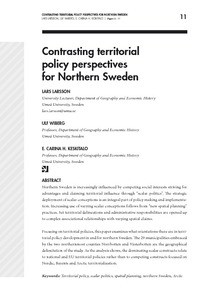 Northern Sweden is increasingly influenced by competing social interests striving for advantages and claiming territorial influence through “scalar politics”. The strategic deployment of scalar conceptions is an integral part of policy making and implementation. Increasing use of varying scalar conceptions follows from “new spatial planning” practices. Set territorial delineations and administrative responsibilities are opened up to complex associational relationships with varying spatial claims.

Focusing on territorial policies, this paper examines what orientations there are in territorial policy development in and for northern Sweden. The 29 municipalities embraced by the two northernmost counties Norrbotten and Västerbotten are the geographical delimitation of the study. As the analysis shows, the dominating scalar constructs relate to national and EU territorial policies rather than to competing constructs focused on Nordic, Barents and Arctic territorialization.