The physical, moral and spiritual : a study on vitalist psychology and the philosophy of religion of Lars Levi Laestadius 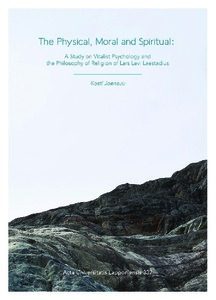 Lars Levi Laestadius (1800–1861) is commonly known as an influential North Swedish Lutheran revivalist and a multidisciplinary scientist. His work in botany, Sámi mythology, theology, and his strong influence on North Scandinavian spirituality and culture have been widely studied. The studies on Laestadius’ theology agree that anthropology forms the core and basis of his theological and religious thought. In his main work, Dårhushjonet: En Blick I Nådens Ordning (The Lunatic: An Insight Into the Order of Grace), a grounding anthropology is conceived as having a holistic and vitalistic psychology in its character. However, the fundamental role of anthropology and vitalist psychology as a founding “insight” of Laestadius’ systematic theory has never been a topic of academic philosophical research.

In this offered dissertation, The Lunatic is approached holistically as a philosophical and scientific-psychological apology for North Scandinavian pietism. The Lunatic proved to have a strong tendency to rationalize religious views via scientific-conceptual systematization, especially vitalist psychophysiology. As a basic philosophical study, utilizing philosophical analysis and phenomenological interpretation as its method, this effort confirms the vitalist character of Laestadius’ theory and points out the central philosophical and psychological insights that underlie the “system” of Laestadius’ religious and theological views. Through the use of historical contextualization, the study argues that the criticism of Enlightenment rationalism, German idealism, and Western metaphysics overall forms the counterpole for all of Laestadius’ theoretical elaborations. In this regard, Laestadius sought to overcome classical Cartesian mind/body dualism and its intellectualistic emphases. Thus, the study carries out an interpretative task to analyze the ways in which the human person and its faculties of soul are redefined within the vitalist frame in Laestadius’ theory. The specific objective was to follow and analyze how Laestadius sought to hold the physical, moral (psychic), and spiritual (metaphysical) spheres of human existence together, especially in relation to the psychophysiological foundation adopted from the vitalist tradition. In this respect, the focus was placed on the psychophysiological explanations of morality and spirituality and on the idea of intentionality as such.

In the end, Laestadius’ critique of metaphysical rationalism and transcendental philosophy was raised for more discussion. The question of whether Laestadius’ critique and vitalist philosophy and psychology can be attached to the more general critique of Western metaphysics is discussed with special reference to the tradition of phenomenological philosophy, the aim of which is overcome the prevailing stance of “constant presence” (substance) found in Western metaphysics.

In the main chapter, Chapter 4, Person and Intentionality, Laestadius’ vitalist conception of person and intentionality is analyzed. Chapter 4 deals with the analysis of the central concepts, including the soul, the principle of life, passions, body, the mind, the self, reason, will, understanding, and imagination. As a result of this research, Laestadius’ anthropology is interpreted as being firmly attached to medical vitalist theorizing and especially to Xavier Bichat’s vitalist medical philosophy. Driving back to vitalism from the prevailing metaphysical rationalism and idealistic metaphysics the effort includes a clear critique of the classical concepts of “substantia” and “essential,” wherein Laestadius developed a vitalist redefinition of essentiality (väsendet) as a vital force for indicating the actual human condition of existence without being simply substantial or essence/being (existentia sine essentia et sine substantia) in terms of classical metaphysical meaning.

This deconstructive redefinition was the groundwork for Laestadius’ further psychological and theological elaboration and an alternative to the metaphysical rationalistic and simple mechanistic idea of man and worldview. Emphasizing embodied experience and the processual dynamic event of life in a pre-phenomenological way, Laestadius’ analysis constituted a holistic idea of man, and it sought to overcome a simple Cartesian mind/body dualism with the concepts of the principle of life (livprincip), organic life, and sensory life (nervliv). In Laestadius’ theory, the faculties of soul, such as reason, understanding, and will, were redefined in vitalist terms as more or less organic sensible functions of the human organism, not as distinct and autonomous faculties of the soul. Chapter 4 thus argues that Laestadius’ vitalism forms a psychosomatic theory of the constitution on a human being and human existence. The passions and their impacts on the physiological organism laid the groundwork for all other higher faculties and functions of the organic-embodied soul, including the possibility of spiritual faith and a living relationship with God. The notion of consciousness, including its objective and subjective dimensions, was determined as embodied intentionality based on a psychosomatic constitution and the vitalist-panpsychistic idea of emergence. The holistic notion of person was thus inextricably attached to the organic body and its surrounding world, thereby constituting a viewpoint of personal embodied intentionality.

In the second main chapter, Chapter 5, Laestadius’ theory is viewed from the perspective of the common Enlightenment vitalist concept of physical/moral, which sought to replace Cartesian body/mind dualism. In this respect, the psychophysiological origins of morality and spirituality are analyzed in more detail through notions of the soul as the principle of life, passions, heart, conscience, perception, awakening, reconciliation, and redefined notions of faith and God. The general conclusion is that Laestadius aimed and managed to overcome the body/mind dualism in the level of origin and cause. His monistic conceptions notwithstanding, he created a different kind of dualism that manifested itself in the cognitive-psychological sphere as a dualism between sensuous “natural” feeling and “moral” feeling.

This distinction derived its roots both from the notions of natural and moral passions and the twofold physiological functions of neural and humoral impacts. Laestadius sought to elaborate on the view of different levels of sensible experience on a physiological plane, so that “moral feeling” would distinguish itself from the mere sensuous natural and more immediate relatedness to its object. Here it was clearly seen how Laestadius’ psychophysiological anthropology turned into ontotheology. This insight was based on the idea of the corrupted nature of the passions that set the vital basis for the faculties of soul, constituting a dissonant turbulence in human experience, and also on the idea of the transcendental character of the flesh itself. Both psychopathological dissonance and the need for reconciliation indicated that natural sensuous intentionality does not fulfil the proper moral and spiritual prerequisites and remains as an objectifying relationship to the “object.” This natural egocentric condition further entailed the necessity of a religious experience of awakening (väckelse) as an initial precondition for reconciliation, and thus also the living dynamic relation to God, existence, and moral way of being in the world. The psychosomatic contradiction of awakening formed the groundwork for the need to conceive a reconciliation as the experiential “psychic” justification of morality and genuine spirituality (psychic reconciliation). Here the moral feeling was conceived to transcend the mere objectifying sensory relationship.

Through the vitalist deconstruction of the notions of man and God, Laestadius’ whole ontotheological system aimed to form a correlation (kinship) between the triadic constitution of human beings and the Trinity of God. The initial constitutive condition of that union is psychic reconciliation. According to Laestadius, genuine spirituality or a “living faith of the heart” is seen as the fundamental of genuine practical morality and spirituality. This emphasis of inward faith signified that conscience has the capability of moral and spiritual judgment to ground the functioning of practical reasoning in matters of life and faith.

At the end of Chapter 5, Laestadius’ critique of metaphysical rationalism is discussed, as it relates to a more general critique of Western metaphysics of substance. Laestadius’ anti-metaphysical stance, combined with the theological insights of psychic reconciliation, included the idea of faith as an un-objectifying intentionality and contrasted with the metaphysical objectifying approach toward being (in their beingness; substance, and essence). Here the “embodied” intentionality of faith and psychic reconciliation was conceived to relate with Luther’s Theology of the Cross, which is generally seen as one of the main sources of the phenomenological critique of Western metaphysics (Heidegger). Laestadius’ vitalist psychophysical manner of analysis gave a reason to define Laestadius’ philosophy and psychology as physiological transcendentalism. A conclusion of Chapter 5 indicated it was possible to interpret the living faith of the heart as embodied un-objectifying intentionality.

These concluding remarks propose that Laestadius’ physiological transcendentalism and philosophy of religion can be considered as a vitalist existentialism or pre-phenomenological approach to the question of Being, God, faith, and human existence. As such, Laestadius’ holistic ontotheological system could be interpreted as a reversal of absolute idealism and its dialectical process of spirit into psychophysiological event of factual life. In this way, Laestadius’ elaboration opposed the intellectual and idealistic tendencies of anthropology and theology and was conceived as a philosophical theology that “makes space” for experiential religiosity and spirituality (utilizing vitalist existentialism).

At the end of these concluding remarks, the more general philosophical question concerning ontological and theological realism in Laestadius’ theory is taken into a preliminary discussion. It is pointed out that the questions of realism were problematic in terms of Laestadius’ theory mainly because Laestadius’ metaphysical and pre-phenomenological presuppositions constitute a vitalist “naturalistic” stance within which the physical and psychic-experiential realms as well as immanent-humane and transcendental-spiritual realms are conceived as co-existing, or constituting a single unity reality. Further, it was proposed that Laestadius’ notions of God and Evil as personifications of passions execute a naturalistic anthropological reduction within the vitalist frame. Accordingly, spiritual-moral experiences and perceptions were interpreted as vital-natural psychophysiological phenomena having, however, a distinct transcendental aspect as a calling “voice of God” which calls a human being to the connection and likeness of God and coincidentally to one’s original soul [or the Self]. The categorical questions of realism were overcome by Laestadius’ vitalist presuppositions and the holistic notion of existence having coincidentally both organic material and vital transcendental dimensions, and the experiential reality being conceived as encompassing both psychophysiological and natural spiritual-transcendental aspects.