Understanding neoliberalism as governmentality : a case study of the IMF and World Bank structural adjustment regime in Ghana 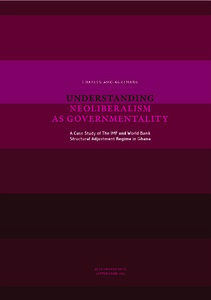 In this thesis, I critically interrogate power relations that underlie practices, techniques and rationalities of contemporary forms of governance represented by the governing strategy of structural adjustment framework devised by the Bretton Woods institutions— especially the IMF and the World Bank. Far from being a technique of coercion and domination, the thesis demonstrates that structural adjustment framework represents a differing modality of global power that attempts to discursively legitimise external interventions through the imposition of neoliberal economic agenda. I show that structural adjustment policies are carefully constructed neoliberal rationalities of governing through which donors seek to transform the government of Ghana into a self-disciplined neoliberal subject that must behave in an appropriately competitive fashion that is congruent with the ethos of market rationality. I draw on Michel Foucault’s nuanced conceptualisation of governmentality, a form of productive and relational power working through individuals’ subjectivities particularly as it coexists with the disciplinary rationale of power, and extend it to the relation between the IMF and the World Bank and the government of Ghana. I analyse how these interactions are embedded within a discursive formation and concrete practices which establish certain views of ‘a problem’ and mobilise particular authoritative actors, techniques and forms of truth as solutions. I also explore how over the decades the IMF and the World Bank through the modalities of conditionality associated with structural adjustment have sought to govern, remake and regulate the economic, political and social institutions of recipient States. In closing, and by way of illustration, I also examine ‘non-compliance’ as one possibility into what Foucault has termed ‘counter-conduct’ through which subjects undermine and challenge governmental forms of power. This being said, within the structural adjustment discourse, there remains, I would be inclined to argue, repressive and dominant forms of power. This thesis, contributes to the contemporary scholarship on governmentality to deepen and re-evaluate the distinctiveness of power relations in the example of the IMF and the World Bank adjustment programmes in Ghana.