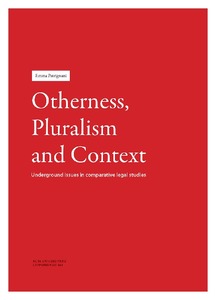 What is this book?
This is an article-based dissertation. It explores issues which are foundational for the theory of comparative law. Ideas drawn from neighbouring disciplines (philosophy, social sciences epistemology, anthropology) are made to interact with law: the conception of otherness, the understanding of pluralism and the meaning of context are basic – in this sense underground – theoretical issues that determine the subsequent methodological choices of the comparatist.

What is theory of comparative law?
The comparative study of laws brings forth various compelling theoretical issues. For example, these concern questions about what is the conception of law in foreign cultures: through comparison domestic notions are put into question, as the comparatist faces the fact that in other places things are organized differently. Moreover, comparison brings about issues on the very possibility to understand the other, in addition to questions about the comparatist’s own ideas and tacit prejudices. Can the other be understood on its own terms? How does the comparatist relate new knowledge to what she already knows? Her pre-understanding is something she cannot completely get rid of, so she needs to acknowledge its influence on the process of acquisition of knowledge. Furthermore, the comparatist exits the normative legal sphere she was trained in and faces other normative spheres. She has to reconsider what normativity means;
being “out” of the normative domestic legal system does not mean to be entirely freed from normativity.

Are other scholars concerned about those issues?
Indeed. Recently, comparative law has been described as the Cinderella that became the Queen. This has happened for various reasons. Classical comparative law drew much on legal material produced by nation states, while nowadays the law is created at multiple levels; its general structure appears more like a net rather than a pyramid. To face the challenges of globalisation, the study of comparative law (and of law in general) has to transform itself by assuming the transnational dimension of the legal and including in the analysis normative phenomena existing on a smaller scale too. Legal theorists and comparatists are needed in order to develop analytic tools which can make sense of the new normative structures studied.
Furthermore, the last 30 years have also witnessed a deeply unravelling internal debate concerning the very fundaments of the discipline, its directions and purposes. Sharp disagreements have been manifested concerning the nature of the legal comparative scholarly endeavour and its aims and reasons: is it a method or a discipline? Does it further knowledge or use in practice? Other debated issues are: micro- and macrocomparison (which one to favour in different circumstances); functionality (whether it is a meaningful starting point); structuralism (whether to adopt it as a background theory); differences vs. similarities (what to focus on); tertium comparationis (what it is and is it necessary to have one for comparing); and translation (practical and ethical issues).
Moreover, debates have considered the possibility and desirability of legal transplants and of legal convergence. The unrest is due to influences coming from among others the following: post-modern philosophy; critical schools of thought such as critical legal studies, post-colonial studies, discourse theory and orientalism; economic analysis of law, behavioural economics and neo-institutional economics; and the debate on objectivity carried out in philosophy of science.

What to learn from this internal debate?
According to the author, this debate resulted in a double complexification. On the one side, the understanding of the compared laws is complexified. This entails perceiving the laws as radically other and therefore not fully comprehensible. Laws have to be analysed without assuming their internal coherence but rather giving voice to the silenced disagreements and placing them within their context, without thereby crystallising it in an unmovable monolith. On the other side, the position of the comparatist has been complexified as well. This leads to the acknowledgment of her responsibility in choosing the appropriate analytical tools for her cognitive interests and stresses the ethical dimension connected to comparative legal research. These two complexifications when combined create the methodological basis against which the articles included in this dissertation have to be read.

Are these two complexifications accepted in the literature?
Overall, while the complexification of the concept of law has now reached a relatively higher level of acceptance (at least most comparatists would agree that good comparison has to look further then black-letter, legislated rules), the same cannot be said for the complexification of the position of the comparatist. Indeed the more easily spottable political implications of legal comparison have been unveiled, as have the parochialism and ethnocentrism of certain scholarship. Still, not many are willing to stop pondering on the epistemological position of the comparatist as a knower. The methodological debate within comparison seems to have really digested only the first complexification. This is the historical conjuncture where this dissertation can be located. It contributes to this debate by claiming that the two complexfications actually travel together. A broadened understanding of law requires a rethinking of the role of the comparatist as well: the field of study gets so broadened that the comparatist herself is included in it.

What is the overall aim of this dissertation?
Although each article stands on its own, the overall aim of this dissertation is to advance a certain attitude toward comparativism as an academic endeavour. It aims at raising awareness of the risks connected to reductionism and simplification and argues for a conception of legal comparative knowledge that embraces complexity theory and that reflects on its own epistemological status. Both the understanding of the compared laws and the ethical position of the comparatist need to be reflected upon, which is what these contributions purport to do.