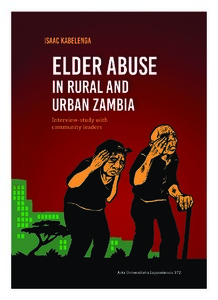 The main aim of this study was to describe and understand elder abuse using the views of the community leaders involved in addressing elder abuse in rural and urban Zambia. By using social constructionism as the philosophical underpinning of the study, and qualitative research with 31 informants, the results indicate that elder abuse in both rural and urban Zambia is a multifaceted social problem. This is because it does not only negatively affect the abused elder people but also affects the perpetrators of elder abuse, the local communities where abuse takes place and the whole Zambia. It is socially constructed in seven main forms namely spiritual abuse, political abuse, verbal abuse, physical abuse, material abuse, sexual abuse and neglect. Interestingly is that all these types of abuse are inseperable.This is because they usually take place simultaneously. Thus, from this study, it is clear that most of the abused elder people in the two communities of Zambia simultaneously suffer more than one type of abuse. The study has also constructed new knowledges on various aspects of elder abuse which include characteristics of abused elder people, characteristics of perpetrators of elder abuse, consequences of elder abuse and measures which are effective and ineffective in the fight against elder abuse. With regard to the characteristics of the abused elder people and perpetrators of abuse, the current study has shown that there is no single category of elder people or perpetrators that can be single out to be the victims or to be behind elder abuse. Rather, a mixture of elder people suffers abuse. In the same vein, there is a mixture of perpetrators of elder abuse. This is because what determine elder abuse are the types of relationships that exist between the particular elder person and other members of society. If the relationship is poor, any elder person regardless of the socio-economic status can be abused. Equally, if the relationship is poor, any person regardless of the socio-economic status can participate in elder abuse. In terms of the consequences, the study has established that elder abuse has intended and unintended consequences which transcend the abused elder person and the abuser. This is because the effects of elder abuse are also felt by the Zambian government and other actors involved in the social development of Zambia. Coming to the measures, the study has shown that both formal and informal measures can be used to address elder abuse. Depending on how they are used, both types can be effective and/or ineffective in the fight against elder abuse. Based on the present results, the study concludes that despite the differences in ways of living in rural and urban Zambia, elder abuse has manifested itself in similar ways. However, how the informants socially constructed various dynamics of elder abuse is different in a number ways from what is documented in many scientific literatures on elder abuse. Thus, the study concludes also that elder abuse can be understood well using the knowledge of the local people who understand their local environments better. On the basis of the findings, the context-specific model for elder abuse has been generated. The study argues also that since social workers are among the main frontline workers in addressing elder abuse, the findings established in this study have implications for social work education, practice and research in both global north and global south. This is because the findings made suggest new ways of thinking about elder abuse.