Bringing researchers and resources together : the Atiku northern and arctic studies portal 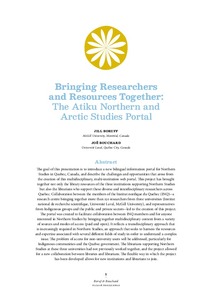 The goal of this presentation is to introduce a new bilingual information portal for Northern Studies in Quebec, Canada, and describe the challenges and opportunities that arose from the creation of this multidisciplinary, multi-institution web portal. This project has brought together not only the library resources of the three institutions supporting Northern Studies but also the librarians who support these diverse and interdisciplinary researchers across Quebec. Collaboration between the members of the Institut nordique du Quebec (INQ)--a research centre bringing together more than 150 researchers from three universities (Institut national de recherche scientifique, Université Laval, McGill University), and representatives
from Indigenous groups and the public and private sectors--led to the creation of this project. The portal was created to facilitate collaboration between INQ members and for anyonen interested in Northern Studies by bringing together multidisciplinary content from a variety of sources and modes of access (paid and open). It reflects a transdisciplinary approach that is increasingly required in Northern Studies, an approach that seeks to harness the resources and expertise associated with several different fields of study in order to understand a complex issue. The problem of access for non-university users will be addressed, particularly for Indigenous communities and the Quebec government. The librarians supporting Northern
Studies at these three universities had not previously worked together, and the project allowed for a new collaboration between libraries and librarians. The flexible way in which the project has been developed allows for new institutions and librarians to join.