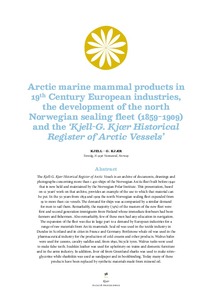 The Kjell-G. Kjær Historical Register of Arctic Vessels is an archive of documents, drawings and photographs concerning more than 1 450 ships of the Norwegian Arctic fleet built before 1940 that is now held and maintained by the Norwegian Polar Institute. This presentation, based on 12 years’ work on that archive, provides an example of the use to which that material can be put. In the 50 years from 1859 and 1909 the north Norwegian sealing fleet expanded from 19 to more than 120 vessels. The demand for ships was accompanied by a similar demand for men to sail them. Remarkably, the majority (74%) of the masters of the new fleet were first and second generation immigrants from Finland whose immediate forebears had been farmers and fishermen. Also remarkably, few of these men had any education in navigation. The expansion of the fleet was due in large part to a demand by European industries for a range of raw materials from Arctic mammals. Seal oil was used in the textile industry in Dundee in Scotland and in cities in France and Germany. Bottlenose whale oil was used in the pharmaceutical industry for the production of cold creams and other products. Walrus hides were used for canons, cavalry saddles and, from 1890, bicycle tyres. Walrus tusks were used to make false teeth. Sealskin leather was used for upholstery on trains and domestic furniture and in the arms industry. In addition, liver oil from Greenland sharks was used to make nitroglycerine while sharkskin was used as sandpaper and in bookbinding. Today many of these products have been replaced by synthetic materials made from mineral oil.