Archives and libraries of the people, by the people, for the people : how to open collections by crowdsourcing at the special library 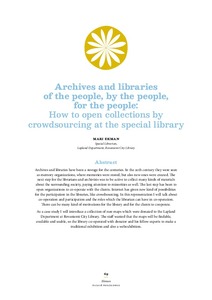 Archives and libraries have been a storage for the centuries. In the 20th century they were seen as memory organizations, where memories were stored, but also new ones were created. The next step for the librarians and archivists was to be active to collect many kinds of materials about the surrounding society, paying attention to minorities as well. The last step has been to open organizations to co-operate with the clients. Internet has given new kind of possibilities for the participation in the libraries, like crowdsourcing. In this representation I will talk about co-operation and participation and the roles which the librarian can have in co-operation. There can be many kind of motivations for the library and for the clients to cooperate.

As a case study I will introduce a collection of rare maps which were donated to the Lapland Department at Rovaniemi City Library. The staff wanted that the maps will be findable, available and usable, so the library co-operated with donator and his fellow experts to make a traditional exhibition and also a webexhibition.