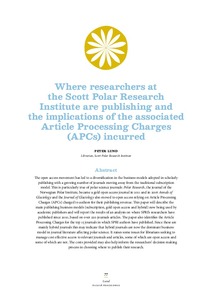 The open access movement has led to a diversification in the business models adopted in scholarly publishing with a growing number of journals moving away from the traditional subscription model. This is particularly true of polar science journals: Polar Research, the journal of the Norwegian Polar Institute, became a gold open access journal in 2011 and in 2016 Annals of Glaciology and the Journal of Glaciology also moved to open access relying on Article Processing Charges (APCs) charged to authors for their publishing revenue. This paper will describe the main publishing business models (subscription, gold open access and hybrid) now being used by academic publishers and will report the results of an analysis on where SPRI’s researchers have published since 2010, based on over 220 journals articles. The paper also identifies the Article Processing Charges for the top 15 journals in which SPRI authors have published. Since these are mainly hybrid journals this may indicate that hybrid journals are now the dominant business model in journal literature affecting polar science. It raises some issues for librarians seeking to manage cost effective access to relevant journals and articles, some of which are open access and some of which are not. The costs provided may also help inform the researchers’ decision making process in choosing where to publish their research.