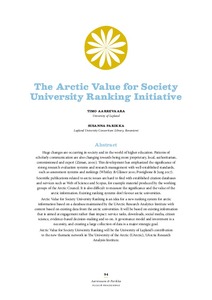 Huge changes are occurring in society and in the world of higher education. Patterns of scholarly communication are also changing towards being more proprietary, local, authoritarian, commissioned and expert (Ziman, 2000). This development has emphasized the significance of strong research evaluation systems and research management with well-established standards, such as assessment systems and rankings (Whitley & Glässer 2010; Postiglione & Jung 2017).

Scientific publications related to arctic issues are hard to find with established citation databases and services such as Web of Science and Scopus, for example material produced by the working groups of the Arctic Council. It is also difficult to measure the significance and the value of the arctic information. Existing ranking systems don’t favour arctic universities.

Arctic Value for Society University Ranking is an idea for a new ranking system for arctic information based on a database maintained by the UArctic Research Analytics Institute with content based on existing data from the arctic universities. It will be based on existing information that is aimed at engagement rather than impact: service tasks, downloads, social media, citizen science, evidence-based decision-making and so on. A governance model and investment is a necessity, and creating a large collection of data is a major strategic goal.

Arctic Value for Society University Ranking will be the University of Lapland’s contribution to the new thematic network in The University of the Arctic (UArctic), UArctic Research Analysis Institute.