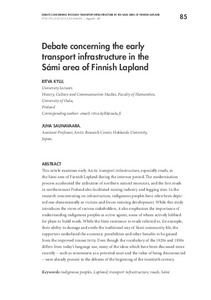 This article examines early Arctic transport infrastructure, especially roads, in the Sámi area of Finnish Lapland during the interwar period. The modernisation process accelerated the utilisation of northern natural resources, and the first roads in northernmost Finland also facilitated mining industry and logging sites. In the research concentrating on infrastructure, indigenous peoples have often been depicted one-dimensionally as victims and forces resisting development. While this study introduces the views of various stakeholders, it also emphasises the importance of understanding indigenous peoples as active agents, some of whom actively lobbied for plans to build roads. While the Sámi resistance to roads referred to, for example, their ability to damage and erode the traditional way of Sámi community life, the supporters underlined the economic possibilities and other benefits to be gained from the improved connectivity. Even though the vocabulary of the 1920s and 1930s differs from today’s language use, many of the ideas which have been discussed more recently – such as remoteness as a potential asset and the value of being disconnected – were already present in the debates of the beginning of the twentieth century.