A Caution : the Place of Indigenous Womanhood as a Political Strategy 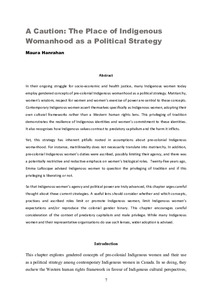 In their ongoing struggle for socio-economic and health justice, many Indigenous women today employ gendered concepts of pre-colonial Indigenous womanhood as a political strategy. Matriarchy, women’s wisdom, respect for women and women’s exercise of power are central to these concepts. Contemporary Indigenous women assert themselves specifically as Indigenous women, adopting their own cultural frameworks rather than a Western human rights lens. This privileging of tradition demonstrates the resilience of Indigenous identities and women’s commitment to these identities. It also recognises how Indigenous values contrast to predatory capitalism and the harm it inflicts.
Yet, this strategy has inherent pitfalls rooted in assumptions about pre-colonial Indigenous womanhood. For instance, matrilineality does not necessarily translate into matriarchy. In addition, pre-colonial Indigenous women’s duties were ascribed, possibly limiting their agency, and there was a potentially restrictive and reductive emphasis on women’s biological roles. Twenty-five years ago, Emma LaRocque advised Indigenous women to question the privileging of tradition and if this privileging is liberating or not.
So that Indigenous women’s agency and political power are truly advanced, this chapter urges careful thought about these current strategies. A useful lens should consider whether and which concepts, practices and ascribed roles limit or promote Indigenous women, limit Indigenous women’s expectations and/or reproduce the colonial gender binary. This chapter encourages careful consideration of the context of predatory capitalism and male privilege. While many Indigenous women and their representative organisations do use such lenses, wider adoption is advised.