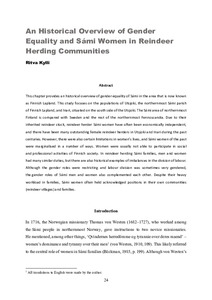 This chapter provides an historical overview of gender equality of Sámi in the area that is now known as Finnish Lapland. This study focuses on the populations of Utsjoki, the northernmost Sámi parish of Finnish Lapland, and Inari, situated on the south side of the Utsjoki. The Sámi area of northernmost Finland is compared with Sweden and the rest of the northernmost Fennoscandia. Due to their inherited reindeer stock, reindeer herder Sámi women have often been economically independent, and there have been many outstanding female reindeer herders in Utsjoki and Inari during the past centuries. However, there were also certain limitations in women’s lives, and Sámi women of the past were marginalised in a number of ways. Women were usually not able to participate in social and professional activities of Finnish society. In reindeer herding Sámi families, men and women had many similar duties, but there are also historical examples of imbalances in the division of labour. Although the gender roles were restricting and labour division was sometimes very gendered, the gender roles of Sámi men and women also complemented each other. Despite their heavy workload in families, Sámi women often held acknowledged positions in their own communities (reindeer villages) and families.