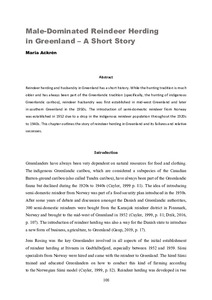 Reindeer herding and husbandry in Greenland has a short history. While the hunting tradition is much older and has always been part of the Greenlandic tradition (specifically, the hunting of indigenous Greenlandic caribou), reindeer husbandry was first established in mid-west Greenland and later in southern Greenland in the 1950s. The introduction of semi-domestic reindeer from Norway was established in 1952 due to a drop in the indigenous reindeer population throughout the 1920s to 1940s. This chapter outlines the story of reindeer herding in Greenland and its failures and relative successes.