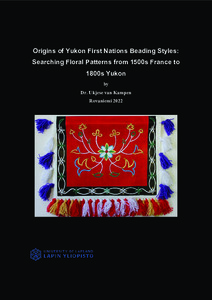 This dissertation shows the path of 1600s regional floral embroidery designs from France to the Yukon. These patterns became the first floral designs that my culture, the Yukon First Nations people, adopted in the mid-late 1800s. Before floral designs Yukon First Nations people created a geometric style of imagery that was applied to their clothing and tools. This begs the question: where did the floral imagery originate from?

I begin with an examination of Athapaskan geometric designs before the adoption of floral designs. I then examine the Upper Yukon River Floral style that my people adopted in the mid-late 1800s. From here I move back in time to what I have identified as the Cree/Métis ‘A’ style. It was the Cree/Metis that first brought floral designs into the region which they themselves adopted earlier and from peoples further from the east. After examining the Cree/Metis, Anishinaabe, and styles of First Nations people in the Great Lakes region I will jump further back in history all the way to 1600s France where I believe the styles originated from. I will analysis the French Regional and Baroque Styles and it was these styles that were brought from France to New France by various Catholic orders. Now moving forward in time I will show the adopting of the French styles by the Huron and Iroquois. I will show through diffusion that these styles generally stayed the same over time as they spread west and north, eventually arriving into the Yukon. I then analyse various floral styles adopted by Yukon First Nations and show how they changed by the mid-1900s.