Opting into the common European sales law : how to opt-into, or opt-into at all, in B2C contracts? 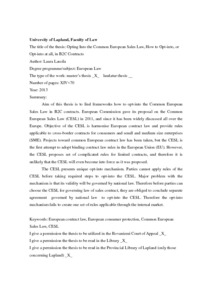 Aim of this thesis is to find frameworks how to opt-into the Common European Sales Law in B2C contracts. European Commission gave its proposal on the Common European Sales Law (CESL) in 2011, and since it has been widely discussed all over the Europe. Objective of the CESL is harmonise European contract law and provide rules applicable to cross-border contracts for consumers and small and medium size enterprises (SME). Projects toward common European contract law has been taken, but the CESL is the first attempt to adopt binding contract law rules in the European Union (EU). However, the CESL proposes set of complicated rules for limited contracts, and therefore it is unlikely that the CESL will even become into force as it was proposed.

The CESL presents unique opt-into mechanism. Parties cannot apply rules of the CESL before taking required steps to opt-into the CESL. Major problem with the mechanism is that its validity will be governed by national law. Therefore before parties can choose the CESL for governing law of sales contract, they are obliged to conclude separate agreement governed by national law to opt-into the CESL. Therefore the opt-into mechanism fails to create one set of rules applicable through the internal market.