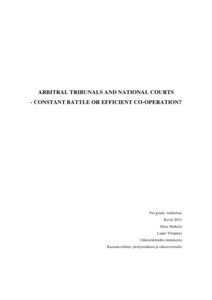 Arbitration is a private method of dispute resolution used mostly in commercial relationships. It provides the parties an efficient way to finally resolve their disputes outside national courts. This study presents the basic principles of international arbitration focusing on the interaction between arbitral tribunals and national courts. It is not always clear which one has the jurisdiction on certain issues and in some cases the parties may face the risk of being involved in parallel proceedings.

The study is structured to present some distinct features of arbitration as the basic rules related to arbitration agreement and the general principles governing the recognition and enforcement of arbitral awards under the New York Convention. An award would have no significance if it could not be enforced where needed. Through the widely accepted New York Convention arbitral awards are presumed to be enforceable, and the enforcement can be denied only on specified grounds. Enforcement is the main task of national courts concerning international arbitration.

Tribunals and courts both have certain jurisdiction in arbitration based on international principles and national legislation. The tribunal may rule on its own jurisdiction; this principle of competence-competence helps to define jurisdictional questions in unclear situations together with the principle of separability. A request may also be made to a national court concerning the jurisdiction of the tribunal, in which case the court must determine whether it decides the issue and in which extent, or whether it refers the parties to arbitration. National courts always have the final word on jurisdictional issues.