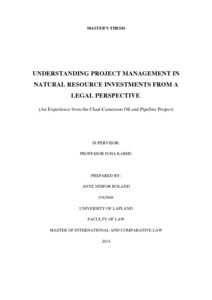 This thesis reports the findings of modern day trench and strategies related to project management- in this case, natural/sustainable resource investment projects analysed from a legal or why not a lawyer’s perspectives. In a bid to further distinguish this from a scientific piece, the research proposals and analysis drown here involves empirical judgement based on the rightful holistic legal approach.

The framework includes analysis or experience stemming from a high profile foreign investment project or public procurement project dope the Chad-Cameroon Pipeline Project (a project for the construction of an oil pipeline from Chad to the coast of Cameroon for storage and subsequent exportation to the world market; herein after referred to as “The Project”), whose improper management/execution has (is) produced a rather negative effect on nearby land, environment, nature and the local inhabitants thereby casting a gloomy cloud on, among others, the existing human rights standards.

Conducted interview and data analysis in this research build-up, proved most of the findings here. Also, constructive criticism and research analysis of which majority indicate the absence of a solid legal framework from The Project, forms the basis of a proposed generalised knowledge of ideas, suggesting a subsequent adoption in future investment projects of similar nature.

The conclusive remarks offer and recommend advocates of legal, development and environmental studies a chance to uphold its course while calling on fellow academicians to engage more in associated works all in a bid to change the mind-set of governments and those in authorities as such engaged in related works.