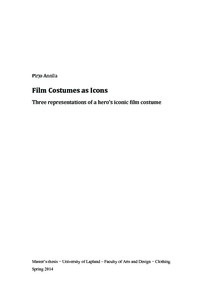 This thesis is a qualitative study that provided a deeper theoretical knowledge of the concept of icon. Main source of evidence was the analysis of the three film costumes from the feature 50 Most Iconic Movie Looks. Cinema's sartorial trendsetters and their signature outfits from the TotalFilm.com –website. The criteria of genre, sex and release date of the film defined the choosing of the costumes. The analysis was conducted by adapting two analyzing methods of Roland Barthes: The Five Codes and Rhetoric of the image. They are methods of qualitative content analysis of an image. The main purpose of the study was to link Lotman’s theoretical point of view with the analysis of three film costumes.