Desire to belong : contesting the view of Irish travellers as Deleuzian and Guattarian nomads 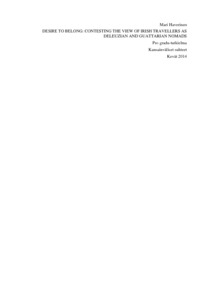 In my thesis I have discussed whether Irish Travellers could be considered to be Nomads in a way that French theorists Gilles Deleuze and Felix Guattari have developed the concept. Nomads in this context challenge and object the normative order set by the state and the mainstream society. My research is constructed around the concept of ethnicity and namely what Irish Travellers hope to gain with the ethnic status and how this relates to the ways how Travellers are controlled by the state. As a primary material I have used a report made by a Traveller support group which discusses the challenges which Irish Travellers are facing in today’s Ireland and as a method I have used critical discourse analysis.

In my thesis I have discussed how physical nomadism plays a key role constructing Traveller identity and how physical nomadism relates to Deleuze's and Guattari's ideas about Nomadism. According to my findings Irish Travellers have a strong desire to be accepted by the mainstream society and to have an access to the resources controlled by the state. Irish Travellers want to be a part of the mainstream society hence keeping their own culture and be a part of the political process of the state. In the main chapters of my thesis I employ also other Deleuzian and Guattarian concepts like Faciality, Minority and Becoming in order to outline Travellers' relationship to Nomadism.

The conclusion in my thesis is that Irish Travellers cannot be considered Deleuzian and Guattarian Nomads. I have based this argument on my findings that according to my primary material Travellers have a strong desire to be included to the structures of the state and be respected by the main society. These require that Irish Travellers follow the rules set by the state and the mainstream society. There is however a possibility for Travellers to change the system in the context of becoming; by challenging the normative order by entering the state structures and the mainstream society.