Manifestation of what foreign policy : EU actorness in the context of Operation Atalanta 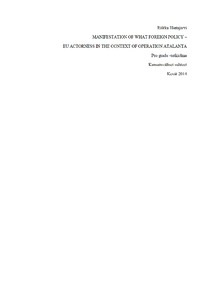 The topic of this master thesis is the European Union foreign and security policy. More detailed, what sort of foreign policy EU is implementing through its military operation EU NAVFOR Atalanta launched to prevent and combat piracy off the coast of Somalia, and which kind of power position it is seeking through it internationally. The theoretical framework creating the structure of the research comes from Hans Morgenthau and his realistic theory, which he introduced more in detail in his book called Politics Among Nations – The Struggle for Power and Peace (1948). In this book, he separates three different policy types based on the state’s foreign policy: policy of imperialism, policy of status quo and policy of prestige. The method of the research is directed content analysis.

All the state’s actions, especially the ones that are considered to belong to the area of foreign politics, are somehow after power: they either seek to increase, stabilize or show off it. Consequently, the objective is to recognize wether EU is trying to acquire more power, hold on to its present power or mainly just demonstrating its power through Operation Atalanta. Furthermore, embarking upon the identification of the foreign policy type allows us to further see what kind of power distribution EU is seeking in relation to other security actors. By recognizing EU’s global ambitions and how it seeks to pursue them in the international security arena predictions can be made of EU’s future engagement beyond its borders in the field of foreign and security politics.

The analysis shows that EU is implementing mainly policy of prestige in the context of Operation Atalanta; in the beginning policy of prestige contributing towards status quo and later policy of prestige to increase power. Its main purpose was to bring visibility and recognition to EU as a global security actor and increase its estimation of power internationally. Through acquiring more equal power distribution it was trying to place itself next to other big security actors and thus present itself as a credible and capable alternative security source. However, its fundamental objective was not to overthrow the present power balance completely but to make adjustments and shift the power structures towards more beneficial to its global actorness.