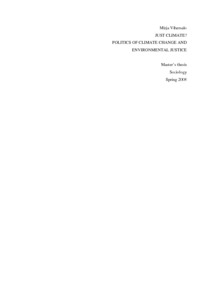 Although climate politics raise numerous questions of justice, discussion on its ethical dimension is still scarce. In my Master’s Thesis I discuss climate politics from the perspective of environmental justice, which as a broad concept directs attention to how environmental benefits and burdens are distributed among currently living people, among current and future people and among human beings and nonhuman nature, as well as how their views are taken into account in environmental decisionmaking. I concentrate on international environmental justice questions by examining how climate change is framed as a problem from the point of view of responsibility in the political statements of the Montreal Climate Conference in 2005. I analyse the research data with the help of frame analysis and Perelman’s theory of argumentation thus looking for argumentation concerning responsibility, its underlying premises and techniques of argumentation. The results suggest that climate change is framed as a problem in two ways. In some statements (mainly developed countries) climate change is considered as a problem of greenhouse gas emissions. Here, describing climate change as a treatable global problem and highlighting economic aspects is typical. In other statements (mainly developing countries) climate change is represented as a problem of vulnerability and scarce resources. The perspective is local and statements emphasise climate change as a threat to the development efforts of these countries. The premises and techniques of argumentation differ between frames. In addition, there is struggle within frames; both frames encompass different claims about how responsibility should be distributed and what responsibility includes.Avainsanat: environmental justice, responsibility, climate politics, Montreal Climate Conference, framing, rhetorical analysis