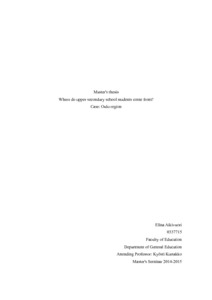 The main goal of this study was to clarify the basic economic and social background of high school student in Oulu region. The idea to conduct this study came from the article Maailman osaavin kansa 2020 (Kivinen, Hedman & Kaipainen, 2013). The data was collected from upper secondary school students with an online research survey. The main research method was quantitative data analysis, and the main unit of this analysis consisted of numeric and written answers in the study.

The main finding was that students come from differing backgrounds and represent different social and economical dimensions in society. The “average” student background, if one could be constructed, would be a middle-income, secular-christian, academically educated family – although other groups were represented too.

The vast majority of the students in the sample were aiming for a graduate-level university degree in their studies, roughly the same number of students aiming for a post-graduate level degree and a university of applied sciences degree.