Ethnographical study : use of new media technologies in a Finnish change consultancy company 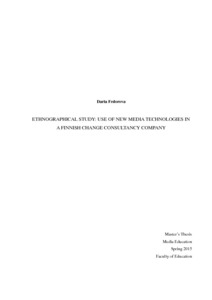 In this study, I investigated how new media technologies were used in a Finnish change consultancy company. Ethnographical method was applied to study the question. I spent four months in a change consultancy company doing observation and actively participating in a company everyday life. As a part of ethnography, nine semi-structured interviews were carried out on all the company members. The concept of domestication was used in this research to study the use of new media technologies in a company. This concept has been presented in the researches for over twenty five years most significantly in England and Scandinavian countries. In addition, the concept of affects and emotions was used. I followed the researches who do not distinguish affect and emotion. I concentrated on the positive affects such as enthusiasm, enjoyment, satisfaction, happiness, joy.

During the workshops new media technologies were not used intensively. However, the way they were used supported in creating the unique working atmosphere and environment. New media technologies were used to create and extend the affects. There were not so many devices that the workers used on a daily basis at work. When they talked about the use of new media, they talked more about practical use like storing the information. The main characteristics of new media – creativity, interactivity and freedom were not realized by all of them. The “reminder” phenomenon has an important meaning in my research. The clients become excited, “hot” during the workshops but there is a danger that they might become “cold” after the workshop if there is no any kind of contact with them.