Performing the emancipation of indigeneity from the corporeal politics, through the indigenous agencies 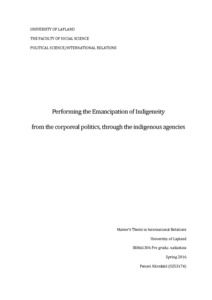 The study examines the reasons of the social problems among the indigenous peoples in the Arctic from the perspective of indigeneity as a spatial setting where the indigenous self-identification and the self-expression occurs. In such analysis, indigeneity appears as an ‘operating condition’ which refers to a world view, where universal interrelatedness is emphasized over ‘social reality’.

The study claims that the social problems among the indigenous peoples in the Arctic, are the consequence of the international practices at the macro-level which have caused the crisis of indigeneity. The conclusion is that ‘citizenship’ which is emphasized by the recent international paradigm, prevents the fulfillment of a ‘social agency’ as the basis of indigeneity. For this reason, the study suggests that the ‘citizenship’ which base on the individual rights, should be replaced with the ‘social citizenship’.

Accordingly, the study deals with the ‘transnationalism from below’ as a gateway to ‘social citizenship’ which would better enable the intervention to the social problems among the indigenous peoples in the Arctic. From this outlook internationalism and globalization appears as the tools of governance against this background. As such, they are analyzed by means of constructivism which suggests that the colonization process still exists.

On the other hand, the study presents that constructivism should be completed with the political psychology in order to understand the international relations. From the basis of these methodological solutions, the autoethnography and the narrative criticism are applied as study methods for the recognition of the negations of modernization and the understanding of the governmental practices among the indigenous peoples. Finally, the study pursues to prove the theoretical setting of the study by means of the gaming research.