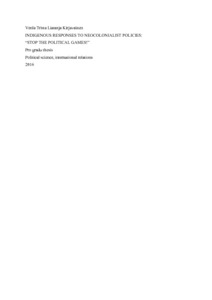 The subject of this study focuses on the idea of indigenous peoples’ empowerment through neocolonial development. The research question of how the Ngada tribe responds regarding their experiences of neocolonialist administrative policies related to the development discourse is answered by applying postcolonial theory and the Foucauldian idea of critique to ethnographic material I collected in Indonesia. I analyzed this material by using narrative inquiry. The thesis statement is that empowerment-oriented programmes which focus on education and tourism cause vulnerability and segregation in the Ngada community.

According to the material, education as a means of development separates the Ngada people from one another in three distinctive ways. It separates couples from each other, children from their homes and families and new graduates from their villages and ancestors. This has had a profound impact on the local economy. Furthermore, although education is very expensive for the locals, it rarely changes their opportunities in the future. Also, the idea of an indigenized curriculum has received a negative response, since such a curriculum could threaten the Ngada people’s cultural continuity.

When it comes to the tourism industry, an unequal relationship between the tourist and the destination community has compounded people’s experience of their own marginality. Contacts between tourists and destination communities have been based on cultural violence, which raises criticism of the tourism industry among the Ngada people. Government support which is keen on developing tourism has made the situation worse, as it has created unnatural hierarchies in the Ngada community. Furthermore, unequal distribution of tourism revenues is a source of concern to many people as it creates conflicts.

The people often respond to development-related policies as a whole by criticizing the government and politics. Corruption and an atmosphere of fear further increase the negative effects. Altogether, the political situation in the Ngada regency is pushing people to rely on their own indigenous cosmology, through which they seek and find their own empowerment.