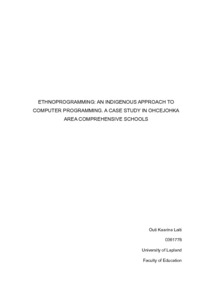 The Finnish curriculum reform integrates programming in the National Core Curriculum in the fall 2016. Finland is not the first country in Europe to take programming as a part of the National Core Curriculum; However, Finland is the first country in Europe about to teach the Sami, the only indigenous people in Europe, to program in basic education. Teaching programming in comprehensive schools is a challenge for there is no previous knowledge how to teach programming as it is presented in the Core Curriculum. The Sami population in Ohcejohka (Utsjoki) is facing the challenge of programming in a more complex way: the world of Information and Communication Technology (ICT) leaves the indigenous cultures out. When keyboards and programs are lacking the language support for the indigenous people, it is leaving a large amount of information out of the current information society. The programming part of the curriculum reform does not consider that there is an ethnic minority in the North of Finland and they have a constitutional right to use their language.

The aim of this study is to find ways to support indigenous languages is the field of computer programming as it is presented in the National Core Curriculum. This study also presents the model of ethnoprogramming. Ethnoprogramming has its roots in ethnosciences, ethnocomputing and indigenous pedagogies. The ethnoprogramming model is based on these theories, the results of case study and the applied traditional knowledge.

The results showed that there are ways to support indigenous languages when teaching programming; however, there are some major issues preventing the further development of ethnoprogramming in Ohcejohka area schools. The condition of hardware, the lack of support for Northern Sami language, lacking ICT support, inadequate skills among the teachers and the lack of pedagogical support are preventing the further development of ethnoprogramming and the cause for minimal ICT usage in Ohcejohka area schools.