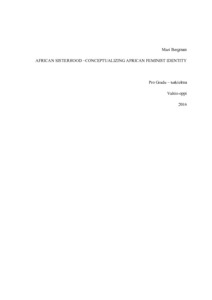 This study focuses on the political identity of African feminism. The purpose is to understand the meaning and the origins of African sisterhood as a identity political project. The analyzing method is content analysis guided by theory. The theoretical framework consists of identity political theories from Harriet Bradley and Manuel Castells. As a supporting theoretical framework the concept of culture relativism and the concept of freedom has been used. The research material consists of publications from an organization called African Feminist Forum.

Aim of research is to study how African feminist forum builds and expresses its political identity in relation to traditional western feminist identity. The meaning of African feminism is to tell it apart from traditional western feminism and make theories and ways of activism that are more valid in the African context. In its rhetoric African feminist forum is trying to state what are the threads and ordeals in its near future and at African women’s living surroundings. This is how the group makes itself distinctive and executes identity political project. Cultural relativism plays an important role in this because the cultural relativist though highlights the importance of respecting your own cultural heritage. This is especially present in a different kind of understanding related to the concept of freedom.