Struggle for security : a discourse theoretical approach to the construction of security against climate change in the United Nations Security Council 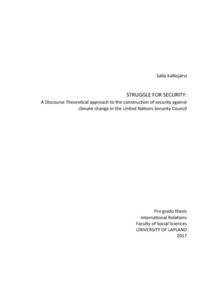 Climate change is increasingly being viewed through the lens of security, with expectations that climate impacts will foment instability and conflicts. This thesis investigates how climate change is interpreted as a security problem in the United Nations Security Council, and whether and how the attempts to define climate change as a security issue are challenging and transforming existing security logics. In international relations, the security agenda is traditionally associated with exceptionalism and logic of war, which are feared to spread in non-traditional sectors through ‘securitization’ of non-traditional security issues such as the environment. The thesis suggests that the securitization of climate change does not only carry a risk of expanding the military logic into the environmental sphere, but also inholds a possibility of a change in security logic itself. Climate security demands a global stance on security policies, which must be based on comprehensive peace building that acknowledges the diversifying needs of societies. Climate change is seen to bring about increase in global instability that is an outcome of both social and environmental disruption resulting from changing climate. Drawing on poststructuralist and discourse theoretical framework the thesis explores the meaning and function of climate security in the process of re-articulation of the security sphere within the United Nations Security Council. Climate change is conceived as a multiplier, root cause and existential threat, which must be secured against through continuous and global process of adaptation that reduces the negative impacts, and works as a precautionary measure.