The right and the principle of autonomy : a discussion of autonomy as a concept in constitutional law 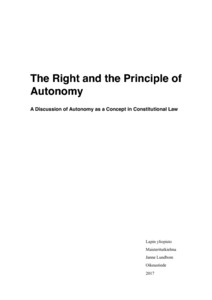 This master´s thesis is a judicial review of the concept of autonomy within the jurisprudence of the European Court of Human Rights. During the review both the views of the proponents and the critics of the Court jurisprudence are discussed. The book endeavours to make sense of the complexity of autonomy as the questions asked expand also to the more broad ques-tions of the history of autonomy, autonomy as a concept of constitutional law as well ques-tions regarding to the status of autonomy as a concept of legal theory.
Rather than casting the reader adrift in a sea of theoretical detail, the author underlines the es-sential values in both the pronents´ and critics´ view of autonomy and forms a principle of reciprocity that could be used to counterbalance the use of the prevailing concept of individ-ual autonomy within the jurisprudence of the European Court of Human Rights in certain sit-uations.
Finding shortcomings in the current theory of autonomy, the author proposes and defends a layered model of autonomy, a tool to better understand the foundational layer of the subject of law, an autonomous person.