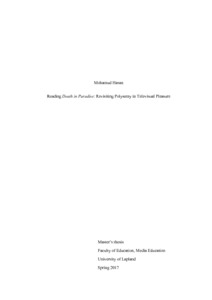 This study examines an episode of Death in Paradise, a BBC television crime drama series in an attempt to find out how televisual pleasure and gender and racial representations are constructed in Death in Paradise.
This study pays a particular attention to the textual features of the programme and employs narrative analysis to account for format, generic convention, style and storytelling in one episode which acts as prototype for discussion of the whole programme. Scene description analysis was put to good effect in the breaking down of the text scene-by-scene.
The analysis showed the text as resisting to be confined within a set of defined guidelines as pertains to generic expectations. Ideologically, the episode proves to be both conformist and contradictory, while genre-wise it both promiscuous and familiar. The programme is also largely progressive in representation of women and Black people.
As to what constitute the source of pleasure, the episode mirrors the whole programme and is a classic polysemic text which is open to multiple readings.