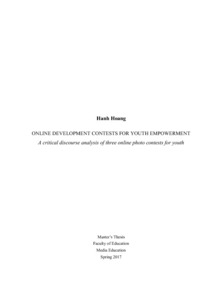 Online contests are getting more popular as means to empower youth and encourage their participation in developmental issues. This research explores the phenomenon of using online contests under the topic of development to empower youth. The theoretical framework is constructed from Paulo Freire’s theories of empowerment and critical consciousness.
The empirical study of this research analysed the “call for entry” webpages of three online photo contests for youth. The cases are “Capture Corruption – Global Photo Competition” by Transparency International in 2015; “Through young eyes – photo competition for UN World Wildlife Day 2017” by CITES Secretariats and “2017 Global Education Monitoring Report Youth Photo Contest” by UNESCO in 2017. The study applied Norman Fairclough’s three-dimensional framework for critical discourse analysis to investigate the texts and four photos in the webpages.
The analysis located three significant types of discourse: motivational discourses, self-efficient discourse and participatory discourse. However, the linguistic method and extent of empowering varied among the three contests. Disempowering content was also recognised in one case. Based on the findings from analysis, in the light of theoretical framework, there was a link between the contests’ “call for entry” webpages and empowerment theory. In particular, motivational discourses contributed to youth psychological empowerment while self-efficient discourse and participatory discourse were part of youth critical consciousness development.