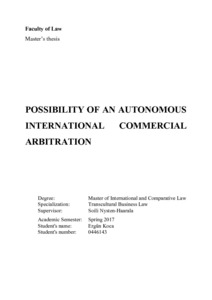 International commercial arbitration (ICA) is an alternative dispute resolution used by businesses dealing with cross-border exchanges. The State has no interests in regulating this field of law. Indeed, ICA is an adjudication system for cross-border exchanges and does not benefit directly one State in particular. The level of the State is not suitable either. Slow, costly, adversarial, non-expert, and unpredictable, State courts are not made for cross-border businesses. This lack of suitability from both sides brings the idea of a possible autonomous ICA system in which arbitration would proceed alongside State courts without any relation between these two. So, is it possible to have an ICA freed from the State?
In order to answer this research question, this thesis analyzed the theoretical foundations of ICA in order to situate autonomous theory and its features. Once its theoretical definition has been given, two practical problems to the realization of the idea were analyzed: public policy and enforcement issues. Solutions exist with the transnational public policy of Pierre Lalive and the idea of a self-enforced system. However, these solutions are solving problems but they rely on the State in a residual way. This does not constitute a huge obstacle because the practice illustrates how small role the State could have and how much autonomous ICA would benefit from this role. Indeed, this small role of the State would render the system legitimate and strong. Finally, the question is not about the presence or the absence of the State but rather the level and quality of its presence. State positivism must acknowledge a paradigm shift towards legal pluralism and autonomy of ICA. However, the current situation compels the prospective autonomous theory to rely on the State as a last resort.