NATO after the cold war : values in action 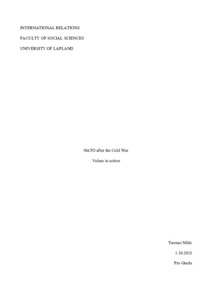 The subject of the thesis is NATO and how the values that the Alliance claims to be at its core have affected its actions after the Cold War ended. The primary sources used in the thesis are the publicly available strategic concepts and summit declarations from 1988 to 2018. The method of analyzing the material is content analysis.

The theoretical framework of the thesis is constructivism with an emphasis on Alexander Wendt’s ideas and the theory of security communities by Karl Deutsch and others. Constructivism places and emphasis on ideas and values in shaping behavior and actions and it makes sense to examine values through it. Security community -theory is relevant due to its emphasis on the international political and security system that NATO is a part of. The concept of The West is discussed because it directly relates to NATO and the values that are commonly described as Western.

The analysis tracks the use of the value terminology though the material from summit to summit and goes deeper into the texts to find out how values are presented as potentially motivating factors for the actions of NATO taken since the end of the Cold War. The findings suggest that the enlargement of the Alliance and the shift towards crisis management operations as well as implementation of various United Nations Security Council Resolutions are at least partially influenced by values. The thesis includes a brief case study of the NATO air war in Kosovo as an example of important Alliance actions after the Cold War. Other perspectives to the evolution of NATO are briefly presented as well.