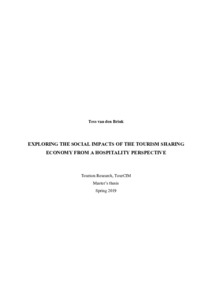 The analysis revealed that a big influence on the hospitality in the tourism sharing economy is Airbnb’s ‘Superhost’ reward system, which puts more pressure on hosts, but also encourages them to go the extra mile for their guests. The tourism sharing economy has not caused major grievances among residents in Limerick or Rovaniemi. It was expressed by both Airbnb hosts and neighbours that the negative impacts of Airbnb are outweighed by the positive impacts. These perceived social impacts can be labelled under the categories: (1) Standard, (2) Social interaction, (3) Ego-economic, (4) Way of life, (5) Personal and public property, (6) Social comfort, and (7) Fear.