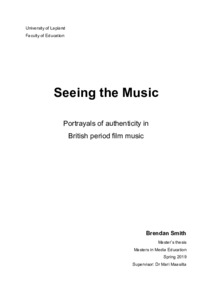 Film music offers a diversity of variation in filmic portrayals. This thesis investigates the role film music plays in portrayals of authenticity in film. The material was chosen from British period films produced within the last 30 years, of which 13 films were analysed. The thesis also set out to test Kassabian’s Identification Tracking theoretical model (2001) that enables
semiotic musical analysis by categorising commonalities according to respective codification
practices, otherwise known as perceptions. Authenticity was found and discussed in themes of auteurism, production, historicity, realism, subject positions and identification. These authenticity portrayals occurred across different levels of film perception, not only at the point of text release. The thesis found that music in film can effectively be analysed using the semiotic analysis style. It also elucidated that authenticity carries meaning through codification practices of perceivers, and that this is established practice in the chosen focus
of British period film. The thesis reiterates the need for more sensorial approaches to analysis of film that is otherwise limited by the sight-biased practice of the popular film discourse.