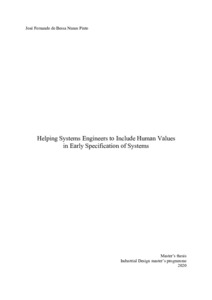 The thesis is publication-based and complemented with the paper “Inclusion of human values in the specification of systems: bridging design and systems engineering” published in 2019, July, in INCOSE International Symposium, volume 29, no. 1, pp. 284-300.

The purpose was to investigate ways to apply Design Thinking principles in the context of Systems Engineering to increase the attention of early specifications of systems in human values. It sought to answer the question “How to ensure that systems engineers include human values in the early specification of systems?” by introducing changes to the activities of identifying stakeholders and describing use case scenarios. These activities affect greatly the specification of systems.

The overarching research methodology was a combination of case study and participatory action research (PAR). The intervention – foundational to PAR – was steered by the human-centred design process and resulted in the creation of an artefact used to perform the above-mentioned activities. The case study provided the background to implement a quasi-experiment comparing the pre-intervention specification of a system with the specification of the same system which resulted from the application of the artefact.

The results of interest of the research can be summed up to, 1) the artefact – a set of two visual canvas used to identify stakeholders and describe use case scenarios, 2) the requirements generated during the intervention, and 3) the feedback provided by the participants.

The research concludes that the artefact helped to better specify human values. The application of the artefact ensures visibility of it. Consequently, the number of requirements covering these values increased significantly. Moreover, besides the small number of the survey’s respondents, participants had reported the intervention and the artefact to be successful.