A CRITICAL PERSPECTIVE ON THE NOTION OF ZOOS A Content Analysis of the Book ‘Zoos and Animal Rights: The Ethics of Keeping Animals’ 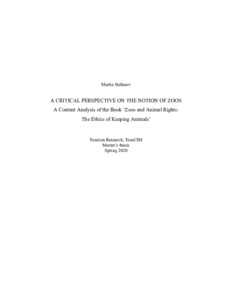 The study is intended to contribute to our understanding of the current perspectives of the human – non-human relationship with animals in captivity in the tourism industry, in the notion of the more ethical and critical turn in tourism studies. Natural Science has already held research on zoos and Animal studies, and we have already witnessed a vivid moral shift also within the studies in Social Science. However, there is a notable lack of research of zoos within the (still new) ethical turn in tourism studies. Covering the gap of knowledge on animals in captivity in the notion of the ethical turn is well beyond the scope of this study. However, the intended outcome of this research is to bring awareness of the need for re-thinking the human - non-human relationship in tourism studies.

This thesis is not another research on the ethical issues related to the captivity, but rather about how the evergreen zoo advocates’ arguments stand within the more ethical notion in contemporary tourism studies? For this, I conduct a content analysis and apply critical theory for critical evaluation of the book of the zoo advocate Bostock, S. S. C ., 'Zoos and animal rights: The ethics of keeping animals', Routledge, 1993. The intended outcome is a suggestion for rethinking of the current anthropocentric perspectives on animals in captivity. I choose this book because it is relatively widespread and is advocating the zoo's practices in a very popular way. Furthermore, the book is well organised and can serve well as a summary of all the possible zooadvocates arguments For this study, I select statements to analyze the methodological framework, methods and paradigms used in the book, and also to investigate which animal ethics methods are overlooked.

To clarify, in this research, I focus on the so-called wildlife in captivity. Wildlife is one of the three terms serving to categorise the non-human animals on domesticated, semi-domesticated, and wild. Therefore, in this paper, I do not investigate the human relation to domesticated, semidomesticated, used in daily life, agricultural activities, tourism, or in any other way. As defined by Orams (2002, p. 283), although most of the animal-based tourist attractions in captive settings typically refer to zoos, they also include a variety of sites such as conventional zoos, marine parks, aquariums, theme parks, safari parks, and sea pens. In this research, I investigate the zoos and the studies about zoos (wildlife in captivity) in my attempt to undermine Bostock's anthropocentric views on animal ethics and to address the need for re-thinking the humannonhuman relationship. Main findings indicate biases, overlooked crucial animal ethics methods, and concerns about the credibility and reliability of the investigated book. As a result, the study suggests re-thinking the Animal Ethics studies and raises the critical methodological question of whether scientific data are to be treated as giving direct access to the truth or as actively constructed narratives which themselves demand analysis? The paper may contribute to the field of animal-based tourism by suggesting a fresh and more critical overview on using animals for entertainment in the tourism industry and can be used to promote more ethical practices among academia and tourism business.