WHOSE HERITAGE? Critical discourse analysis of the archaeological heritage exhibition ''Told by the Graves'' in Mikkeli region, 1994 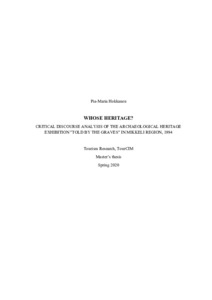 Heritage has many meanings depending on the context. The previous studies have disclosed that heritage is a choice, and it is part of various negotiations and embedded power relations. It is a social practice, a discourse that strengthens and repeats certain values, memories, and experiences, which often involve age, aesthetics, and monumentality as material features of heritage. Many times, these aspects have been defined by heritage experts, elites, and gentlemen, which has evoked critical attention towards the groups and identities whose experiences have been defaced – women, for instance. The studies have found stereotypical stories of women, male-centered and gender-blind representations of heritage interpretations. Despite an increased interest in gender issues, there still exists a lack of gender-focused studies in Finnish heritage research, and in the Mikkeli region, hardly any critical attention towards these matters have been raised. Therefore, this study aims to understand how certain ways of defining and understanding heritage have constructed gender and identity in the texts regarding archaeological heritage exhibition, which took place in the Mikkeli region in 1994. The main research question is: Whose heritage is represented in the newspaper texts about the archaeological exhibition in the Mikkeli region in 1994? The data consisted of local and regional newspapers published in the Mikkeli region, which were looked at with the perspectives of post-structural and feminist standpoints to investigate language use, representations, and power relations. The analysis method of critical discourse analysis was used to explore these matters. The results of the study indicate there existed three dominant ways to see heritage: materiality, locality, and authority. The discourses constructed heritage as a material thing, which was connected to the geographical locations, and knew through heritage experts. These features constructed Savonian identity with exclusion and inclusion of certain meanings. The dominant discourses formed an understanding of gender, which focused on women, but some women only: the limiting practice favored certain age, class, and occupation and proved the intersectionality of gender. Yet, the discourses repeated heteronormative, stereotypical roles of women and men in the past and present. The study found the dominant ways of constructing heritage hinder equality, community participation, and inclusiveness and therefore, suggested employing feminist understanding to make a difference.