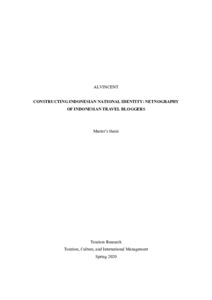 Netnography is use as the methodology. Five research steps as core netnography are utilized for the study. Research Entrée selected and collected 26 entries contains around 199 pages. Data analysis and interpretation is done by initial coding to examined and comparing each data based on theoretical framework of previous studies of national identity and new founding from empirical study. While, interpretative method is used to find connection between tourism and national identity. Ethical consideration is utilized in this study based on ethic guidelines for internet media research.

The result of the study shows that Indonesian able to identify national identity both themselves and other nation they visited through Social Identity Approach. Consumption and media are factors that influence Indonesian on pre, during, and post travel. National heritage also plays important role for Indonesian to understand other national identity. National identity dimensions are found across the data and it can be classified in 3 categories: sources; types; and acceptances. In term of tangible and intangible dimensions, some of them are intertwined with each other.